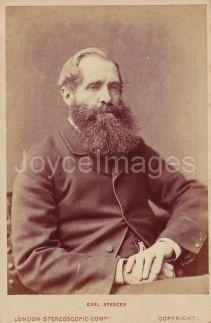 The Lord Lieutenant of Ireland held a number of overlapping roles. He was
* the representative of the King (the "viceroy")
* the head of the executive in Ireland
* (on occasion) a member of the English or British cabinet
* (on occasion) commander-in-chief in Ireland
* the font of mercy, justice and patronage
* Grand Master of the Order of St. Patrick
* he also held an important ceremonial role.

The office of Lord Lieutenant, like the British government in Ireland was generally unpopular with Irish nationalists, though it was supported with varying degrees of enthusiasm by the Irish unionist community. This CDV shows Lord Spencer, twice Lord Lieutenant of Ireland (1868-74 and 1882-85), during whose tenure the Phoenix Park Murders took place.