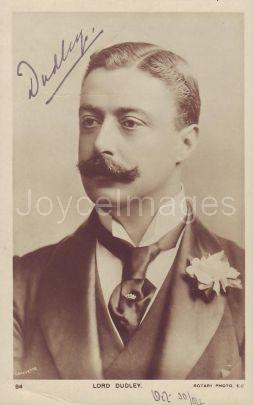 In 1904, William Humble Ward, 2nd Earl of Dudley (1867 - 1932), was Lord Lieutenant of Ireland. He was born in London and educated at Eton. His father died when he was 17 and he inherited enormous wealth along with the Earldom of Dudley. He became part of the social circle of the Prince of Wales (later King Edward VII), who attended his wedding to Rachel Gurney in 1891. He was active in the Conservative Party and held office in the 1895 government of Lord Salisbury. In 1902 Dudley was appointed Lord Lieutenant of Ireland, in which post he displayed great extravagance but also some political and administrative ability. This photo, used in the advertisement for the Mirus bazaar, was taken by Lafayette in Dublin.