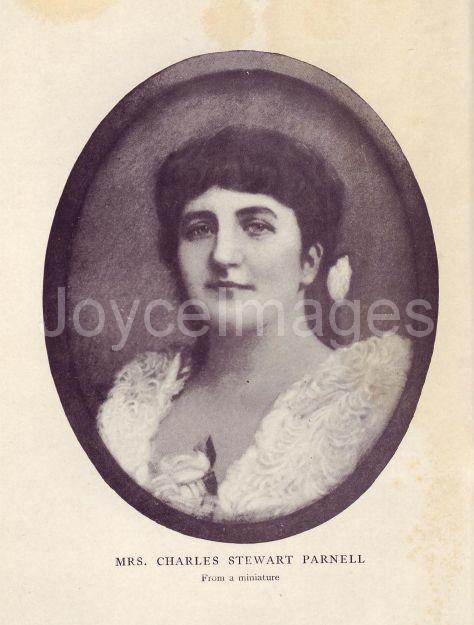 Katharine O'Shea (1845 - 1921), born Katharine Wood, was English. She was known as 'Katie' to her friends, and 'Kitty' to her detractors. She married Captain O'Shea in 1867, but the marriage did not go well, and by 1875 they were effectively living apart. She met Parnell in 1880 and they started a steady relationship; 3 of Katharine's children (Clare, Katie, and a 3rd child who died neonatally) were Parnell's. O'Shea knew about the affair, having challenged Parnell to a duel (1881) and forbidden Katie to see him (1886). His reasons for filing for divorce (1889) are unclear, possibly political or financial. Parnell and Katharine married shortly after her divorce. By then Parnell's political life was essentially over. He died at age 45 of heart problems (1891). She lived the rest of her life in relative obscurity, and is buried in Sussex, England. This picture is from the biography 'Charles Stewart Parnell: His Love Story and Political Life' that she authored (1914) under the name 'Katharine O'Shea (Mrs Charles Stewart Parnell).'