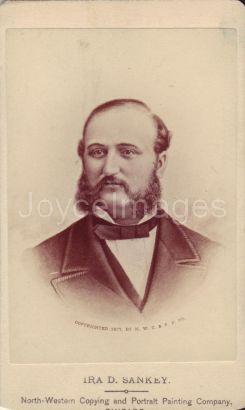 Moody led evangelical campains in England, Scotland, and later throughout the USA, Canada and Mexico. Starting in 1873, Moody was accompanied by Ira D. Sankey, initially as a solo singer, and later as music and choir director as well.

Ira D. Sankey (1840 - 1908) was an American gospel singer and composer born in Edinburg, PA. At age 16, he was converted at a revival meeting at the King's Chapel Church near his home. He was a soldier for the Union during the Civil War, then took a job with the Internal Revenue Service. He was involved with the U.S. Christian Commission of the YMCA, and president of their Newcastle branch. He became well known as a gospel singer, with a melodious baritone voice of rich resonant quality, and was invited to sing at conventions, conferences, and political gatherings. Sankey met Dwight L. Moody in 1870 at a YMCA convention in Indianapolis, IN and was invited to join him on his evangelical campaigns; he soon accepted, resigning from his government job. Sankey accompanied Moody on the 1873-75 revival in the British Isles, and later campaigns in the USA and throughout the world.