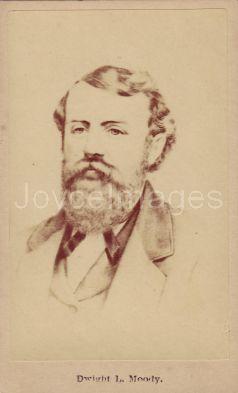 "He infinitely preferred the sacred music of the catholic church to anything the opposite shop could offer in that line such as those Moody and Sankey hymns or Bid me to live and I will live thy protestant to be. He also yielded to none in his admiration of Rossini's Stabat Mater, a work simply abounding in immortal numbers, in which his wife," (U16.1740)

Dwight Lyman Moody (1837 - 1899) was an American evangelist born in Northfield, MA. At 17, he moved to Boston and helped his uncle run a shoe store. He attended Mount Vernon Congregational Church, initially to please his uncle, but soon converted to Christianity. Moody started in Chicago the North Market Hall Sunday School which he built up to a membership of 1,500 (the largest of his time). During the Civil War, he was involved with the U.S. Christian Commission of the YMCA, and ministered at battlefields. It was on a trip to England in 1873 that he became famous as an evangelist preacher. Moody preached a Calvinistic creed which he accepted with all his heart, and was master of an effective style; his sermons abounded in personal allusions, shrewd remarks and home thrusts. He had no polish, little formal education, but he knew well the Bible and accepted it literally; he treated Bible characters very familiarly and enlivened his sermons by imaginary conversations with and between them. His preaching attracted gradually larger crowds, up to 30,000 people.