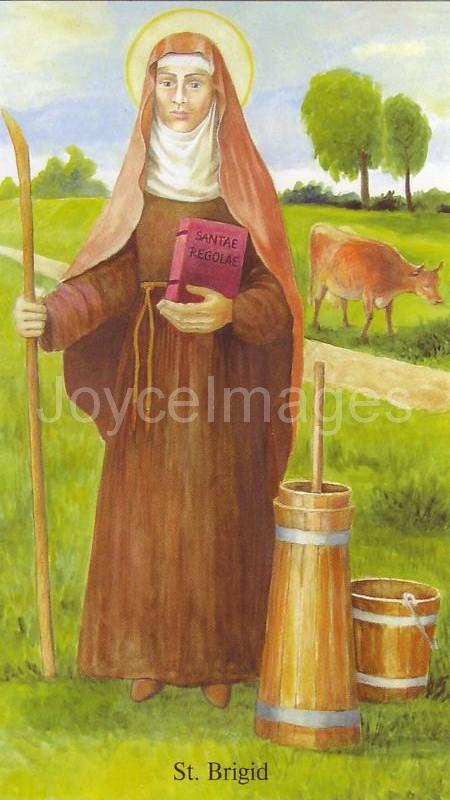 S. Bridgid, aka Brigid of Kildare, or S. Bride (453-523) was Irish, the daughter of Dubtach, a pagan Scottish king of Leinster, and Brocca, a Christian Pictish slave. Just before Brigid's birth, her mother was sold to a Druid landowner. Brigid remained with her mother till she was old enough to become a servant of Dubtach, her father and legal owner. She grew up with high spirits and a tender heart. As a child, she heard S. Patrick preach, which she never forgot. She could not bear to see anyone hungry or cold, and often gave away things that were Dubtach's. She gave his treasured sword to a leper while he was negotiating to sell her to the King of Leinster. Dubtach was about to strike her when Brigid explained she had given the sword to God through the leper. The King, a Christian, interceded saying "Her merit before God is greater than ours." Dubtach solved this domestic problem by freeing Brigid. She was put in charge of her master's dairy. Though she often gave away the produce, the dairy prospered under her care. Her father arranged to marry her to a young bard but she refused and went to Bishop Mel, a pupil of S. Patrick, and took her vows. At the invitation of bishops, she started convents all over Ireland and was a great traveller. Brigid started the monastery of Kildare that she ran on the Liffey river being for both monks and nuns. She is represented as an abbess, usually holding a lamp or candle, often with a cow nearby. Feast February 1.