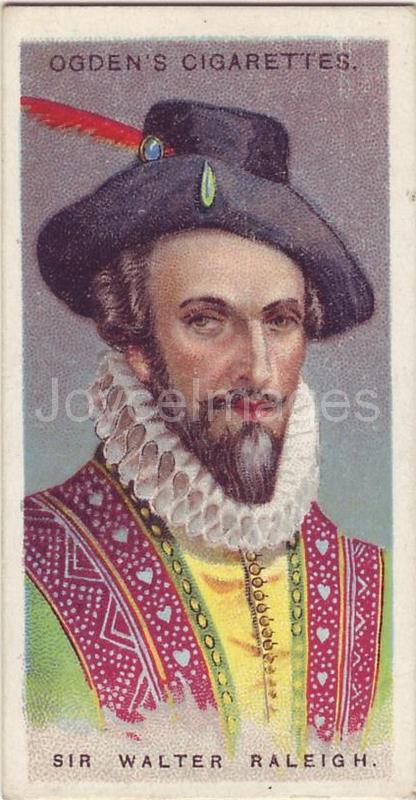 "Sir Walter Raleigh, when they arrested him, had half a million francs on his back including a pair of fancy stays." (U9.628)

Sir Walter Raleigh (c. 1552-1618), was an English writer, courtier and explorer. He was born to a Protestant family in Devon, the son of Walter Raleigh and Katherine Champernowne. Little is known of his early life. He spent some time in Ireland (Co. Westmeath), taking part in the suppression of rebellions, later becoming a landlord of lands confiscated from the Irish. He rose rapidly in Queen Elizabeth's favour and was knighted in 1585. He was involved in the early English colonization of the New World in Virginia under a royal patent. In 1591 he secretly married one of the Queen's ladies-in-waiting, without the Queen's permission, for which he and his wife were sent to the Tower of London. After his release they retired to his estate at Sherborne, Dorset. In 1594 Raleigh heard of a "golden city" in South America and sailed to find it, publishing an exaggerated account of his experiences that contributed to the legend of El Dorado. After Elizabeth died in 1603, Raleigh was again imprisoned in the Tower, this time for alleged treason against King James who was not favorably disposed toward him. He was released in 1616, in order to conduct a second expedition in search of El Dorado. This was unsuccessful and the Spanish outpost at San Thomé was ransacked by men under his command. After his return to England he was arrested and after a show trial, mainly to appease the Spanish, he was beheaded at the Tower of London.