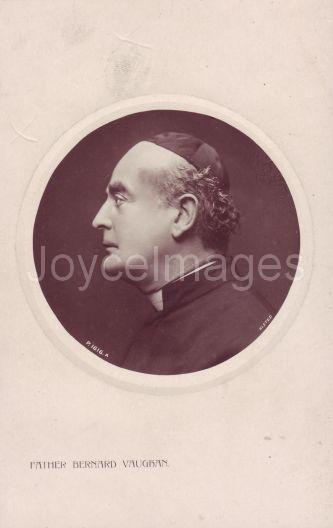 "Father Bernard Vaughan's sermon first. Christ or Pilate? Christ, but don't keep us all night over it. Music they wanted. Footdrill stopped. Could hear a pin drop. I told her to pitch her voice against that corner. I could feel the thrill in the air, the full, the people looking up:
Quis est homo." (U5.398)

Father Vaughan was an English Jesuit (1847 - 1922) and a popular preacher. He is described by his contemporary Father Leonard Feeney, S.J. as "magnanimous, broad-gestured, handsome, kindly-eyed." His congregation was mostly London's high society (including King Edward VII), but he also liked to stand at street corners and preach to common people. His preaching took him to Dublin and as far as Boston, Canada, and Tokyo.