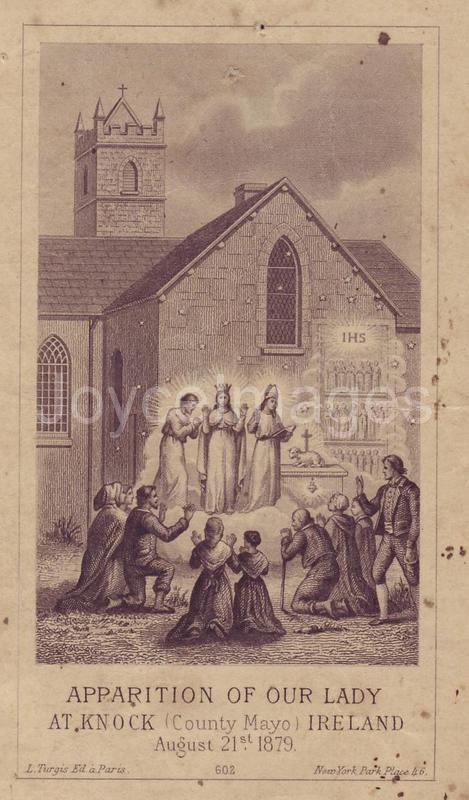 On the evening of August 21st 1879, 15 people (5-75 year old, the first being Mary McLoughlin, housekeeper to Archdeacon Kavanagh), witnessed an apparition of the Blessed Virgin Mary (BVM), St Joseph, and St John the Evangelist at the south gable end of the Church of St John the Baptist in Knock. The BVM was described as life-size, standing about 2 feet above the ground. She wore a white cloak, a crown, and over the crown a rose. St Joseph stood on her right. He also wore white robes, his head bent in respect toward the BVM, and appeared somewhat aged. St John stood to the left of the BVM. He wore a long robe and a mitre, was partly turned away from the others, and appeared to be preaching. He held open a large book in his left hand, and his right hand was raised. Behind the figures, to the left of St John, was an altar with a lamb with a cross (Agnus Dei). Angels hovered around the altar the whole time. The witnesses stood in the pouring rain for some 2 hours reciting the Rosary. An ecclesiastical Commission of Inquiry was established by the Archbishop of Tuam, Most Rev. Dr. John MacHale. The Commission's verdict deemed the testimony of all the witnesses trustworthy and satisfactory. This card (1881), issued by St Joseph's Union in NY, was sold as a fundraiser for its 'Homeless Child' project.