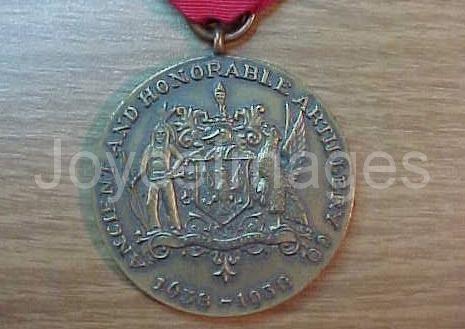 "and ancient and honourable artillery company of Massachusetts." (U17.4453)

The Ancient and Honorable Artillery Company (HAC) of Massaschussetts (1638) is nowadays a military parade and ceremony group. It is the third oldest chartered military organization in the world. It originated following the landing at Plymouth, when the new settlements had no organized military force for protection. Boston settlers who had been members of the HAC of London (organized 1537) decided in 1637 to start a similar organization in the new country; Governor Winthrop granted them a Charter in 1638. HRH Albert Edward Prince of Wales was Commander of the HAC of London; he was unanimously voted an honorary member of the AHC of Massaschusets in 1863, an honor he was offered and officially accepted in 1878.