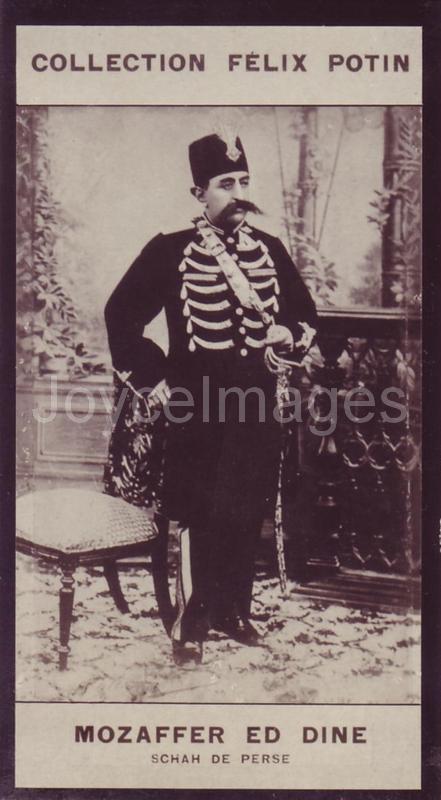 He was succeeded by his son Mozaffar al-Din (1853 - 1907, Shah 1896-1907). Like his father, Mozaffar visited Europe 3 times, borrowing money from Nicholas II of Russia to pay for his extravagant traveling expenses. Stories circulated about him, though not as colorful as those about his father. In 1902, he visited England expecting to receive the Order of the Garter, that King Edward VII had no intention of giving him. A quick thinking secretary had a special medal made that resembled the Order (but missing the Cross of St. George) and dispatched it to the royal yacht just in time for the Shah's arrival. The Shah was enraged by the sight of the fake medal, and threw it out of a porthole. As a consolation, Edward VII introduced him to his personal tailor, Henry Poole and Co. on Savile Row. [P.S. in 1903, Edward VII relented and appointed him a member of the Order]. In France, Mozaffar was introduced to the 'cinematographe,' fell in love with it, and ordered his personal photographer to acquire all the equipment and knowledge needed to bring the moving picture to Iran, thus starting Iranian Cinema.