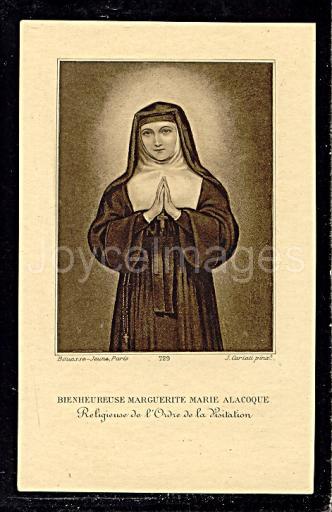 Mulligan is irreverently referring to Margaret Mary Alacoque (1647 - 1690), a French Nun of the Visitation Order and Apostle of the Devotion to the Sacred Heart of Jesus. She was canonized by Benedict XV in 1920. Her visions and teachings have had considerable influence on the devotional life of Catholics, especially since the inauguration of the Feast of the Sacred Heart of Jesus on the Roman calendar in 1856. Represented as a nun in the Visitation habit holding a flaming heart; or kneeling before Jesus, who exposes (or hands) his Sacred Heart to her. She is also mentioned in Dubliners. This card predates 1920 since it is titled Bienheureuse = Blessed, and not Saint.