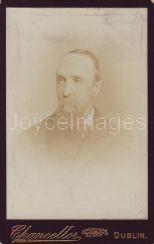 "The sun freed itself slowly and lit glints of light among the silver ware in Walter Sexton's window opposite by which John Howard Parnell passed, unseeing. There he is: the brother. Image of him. Haunting face. Now that's a coincidence. Course hundreds of times you think of a person and don't meet him. Like a man walking in his sleep. No-one knows him. Must be a corporation meeting today. They say he never put on the city marshal's uniform since he got the job. Charley Boulger used to come out on his high horse, cocked hat, puffed, powdered and shaved. Look at the woebegone walk of him. Eaten a bad egg. Poached eyes on ghost. I have a pain. Great man's brother: his brother's brother. He'd look nice on the city charger. Drop into the D.B.C. probably for his coffee, play chess there." (U8.499)