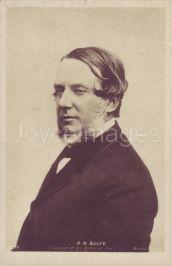 Michael William Balfe (1808 - 1870) was an Irish singer and composer of songs and operas, including 'The Bohemian Girl' and 'The Rose of Castile'. He was born in Dublin, the son of a dancing master. As a child, he played the violin for his father's classes (1814 - 1815). He moved to London in 1823 and became a violinist in the orchestra of Drury Lane; he took formal music lessons from C. E. Horn, the organist at St. George's Chapel. Balfe had a pleasant baritone voice, and sang (in Norwich, Rome, Paris) in various operas. He was also famous for songs he wrote such as 'When other hearts', 'I dreamt I dwelt in marble halls' and 'Come into the garden, Maud'. Balfe wrote 28 operas, the first to be produced was 'I rivali di se stessi' (Palermo, 1829). Balfe was married to Luisa Roser, a Hungarian singer. In 1864, Balfe retired from music to a farm in Hertfordshire.