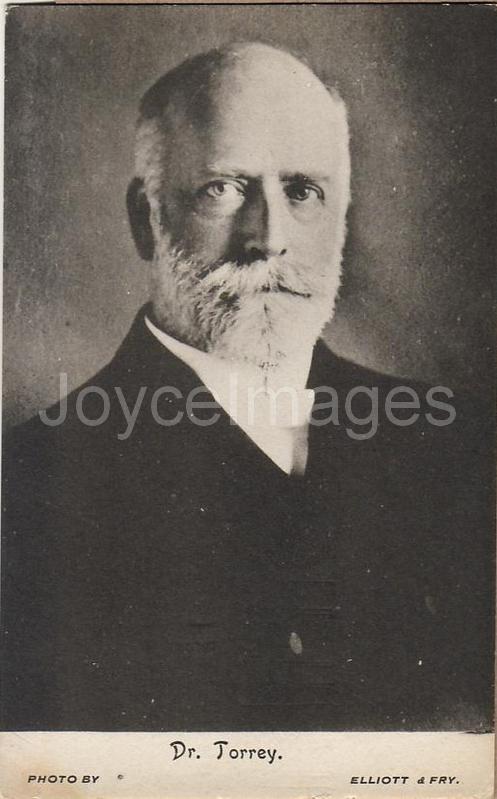 Reuben Archer Torrey (1856 - 1928) was born in Hoboken, New Jersey. He graduated from Yale University in 1875, and Yale Divinity School in 1878, and became a Congregational minister in Garrettsville, Ohio. There he married Clara Smith in 1879 and from 1881 to 1893, they had 5 children. After further studies of theology at Leipzig University and Erlangen University in 1882 – 1883, Torrey joined Dwight L. Moody in his evangelistic work in Chicago in 1889, and became superintendent of the Bible Institute of the Chicago Evangelization Society (now Moody Bible Institute), then in 1894 pastor of the Chicago Avenue Church (now The Moody Church). In 1898, Torrey served as a chaplain with the YMCA at Camp Chicamauga during the Spanish-American war. In 1902 – 1906, joined by Alexander as a gospel singer, he preached worldwide, including Great Britain, China, Japan, Australia, and India. In 1906 – 1907 Torrey continued touring in America and Canada. In 1912, he became Dean of the Bible Institute of Los Angeles (now Biola University) and in 1915, pastor of the Church of the Open Door, Los Angeles. His last evangelistic meeting was in Florida in 1927. Further meetings were cancelled due to his failing health. He died at home in Asheville, North Carolina in 1928. He left a legacy of some 75 books.