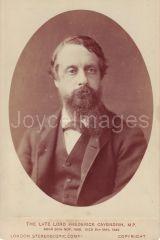 "Murder in the Phoenix park" refers to the assassination, May 6th 1882, of Lord Frederick Cavendish, British secretary for Ireland (shown here), and Thomas Henry Burke, his undersecretary. They were stabbed to death in Phoenix Park by members of the Irish National Invincibles, a splinter republican group. Note that Myles Crawford gets the year wrong. Stephen was born in 1882, presumably in February, so indeed before the Phoenix Park murders.