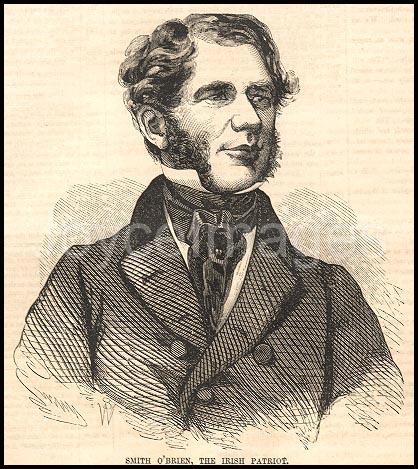 William Smith O'Brien (1803 - 1864) was born in Co. Clare, and was educated at Harrow and at Cambridge. He became M.P. for Ennis (1828), then Limerick (1835). Originally a conservative Protestant 'Country Gentleman', his views gradually shifted to the left. He worked for Catholic Emancipation, Irish poor relief, and state support of the Irish Catholic clergy. He joined the Repeal Association (1843), became a leading member of the Young Irelanders, and a founding member of the Irish Confederation (1847). He was active in relief from the famine. In 1848, he urged the formation of a National Guard and an armed rising. The revolt was abortive, the only engagement being a skirmish with a police detachment in Co. Tipperary. O'Brien was arrested and condemned to death. The sentence was commuted to transportation to Tasmania. He later was pardoned, returned to Europe and Ireland, no longer active in politics.