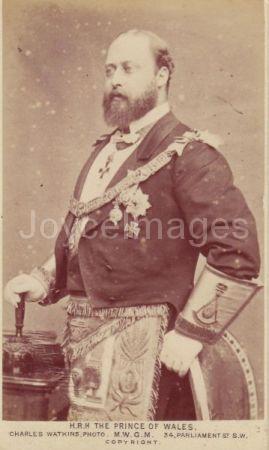 "The King's own. Never see him dressed up as a fireman or a bobby. A mason, yes.
He strolled out of the postoffice and turned to the right. Talk: as if that would mend matters. His hand went into his pocket and a forefinger felt its way under the flap of the envelope, ripping it open in jerks. Women will pay a lot of heed, I don't think. His fingers drew forth the letter and crumpled the envelope in his pocket. Something pinned on: photo perhaps. Hair? No.
M'Coy. Get rid of him quickly. Take me out of my way. Hate company when you." (U5.74)

This CDV shows Edward VII (then Prince of Wales) as a mason. He was installed as Grand Master in 1874. He regularly appeared thus in public, laying the foundation stones of public buildings, bridges, dockyards, and churches with Masonic ceremony, giving great impetus and publicity to the fraternity.