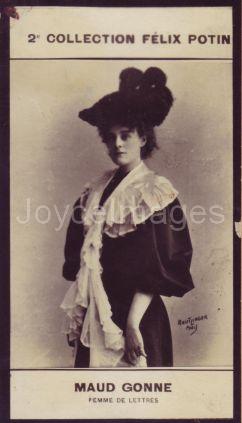 Edith Maud Gonne (1865 - 1953) was an English-born Irish revolutionary, feminist and actress, widely admired for her courage and beauty. She was also famous for the passionate love she inspired W.B. Yeats. Maud was the daughter of a colonel in the British Army, and was educated in Paris and Dublin. Her accomplishments are countless. She campaigned for evicted tenants in Donegal, founded the 'Daughters of Erin,' edited 'The Irish Woman,' played the title role in 'Cathleen Ni Houlihan' (1902), and helped start the Abbey Theatre.