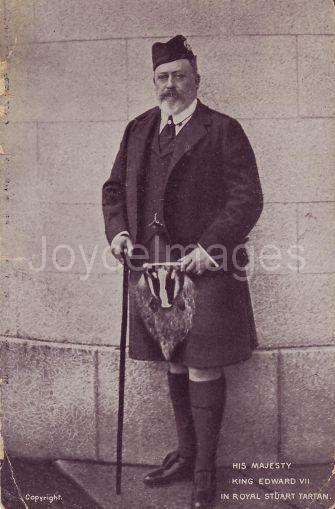 "Mr Deasy stared sternly for some moments over the mantelpiece at the shapely bulk of a man in tartan filibegs: Albert Edward, prince of Wales.
- You think me an old fogey and an old tory, his thoughtful voice said. I saw three generations since O'Connell's time. I remember the famine in '46." (U2.265)

Mr. Deasy's wall hanging is a bit out of date: in 1904, Albert Edward Prince of Wales had become H.M. King Edward VII. He reigned from 1901, when his mother Queen Victoria died, to his own death in 1910. He is seen in this PC wearing royal Stuart tartan filibegs.