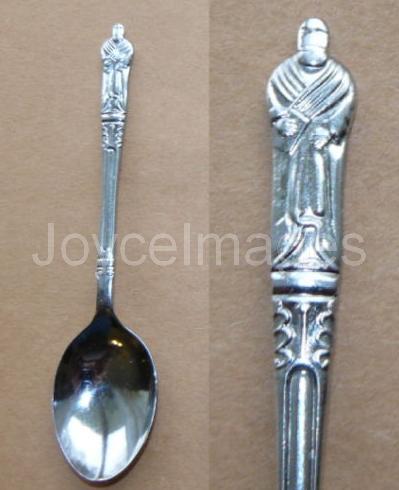 From Wikipedia: An 'apostle spoon' is a spoon (usually silver, silver-plated, or pewter) with an image of one of the 12 apostles as the termination of the handle, bearing his distinctive emblem. The apostles were the 12 disciples of Jesus Christ who were sent away to 'preach to the gentiles' and spread His gospel (Matt 10:5).
Apostle spoons were particularly popular in Pre-Reformation times when belief in the services of a patron saint was strong. They symbolize the Last Supper of Christ in the company of the Apostles. They were especially popular in England, but were also found in large numbers in Germany and France.
Apostle spoons originated in early 15c. in Europe, and were intended for use at the table. By the 16c. they had become popular as baptismal presents for godchildren. They first appeared as a bequest in the will of one Amy Brent who, in 1516, bequeathed "XIII sylver spones of J' hu and the XII Apostells". They are alluded to by the dramatists Ben Johnson, Thomas Middleton, Francis Beaumont, and John Fletcher. Shakespeare refers to them in Henry VIII. In some communities this tradition continued until at least the mid 20c.
Apostle spoons were sometimes produced in sets of thirteen, the thirteenth (the 'Saviour' or 'Master' spoon) showing Jesus. The British Museum in London has a set from England dating from 1536-7 with the Virgin Mary on the thirteenth spoon.
Complete sets of apostle spoons are currently uncommon, and may be found on ebay.