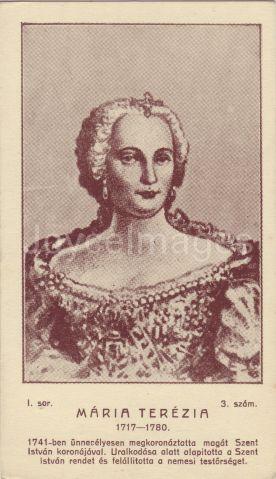 Maria Theresia (1717 - 1780) was the first and only ruling Empress of the 650-yr Habsburg dynasty. Her titles included Archduchess of Austria, Queen of Hungary, and Queen of Bohemia from 1740 until her death. She also became the Holy Roman Empress when her husband was elected Holy Roman Emperor. She was one of the most powerful rulers of her time, ruling over much of central Europe, and one of the 'enlightened despots.' She was the eldest daughter of Elisabeth Christine of Brunswick-Wolfenbattel and Charles VI, whose sole male heir -Leopold Johann- died as an infant in 1716. Maria Theresia was married to Francis Stephen, Duke of Lorraine. They had 16 children, with 11 daughters (all with the first name Maria) and 5 sons surviving to adulthood; their youngest daughter was Maria Antonia (later known as Marie Antoinette, wife of Louis XVI of France).