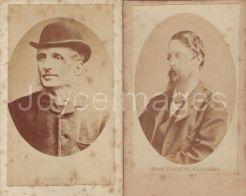 "That was why they thought the park murders of the invincibles was done by foreigners on account of them using knives." (U16.590)

On May 6th 1882, Thomas Henry Burke (Permanent Under Secretary for Ireland) and Lord Frederick Cavendish (newly appointed Chief Secretary for Ireland) were murdered in Phoenix Park by members of the Invincibles, a radical Irish nationalist secret society. Cavendish had just arrived in Ireland, and the two men were on their way to the Viceregal Lodge. The killers used surgical knives: rather than stabbed, the victims were slashed with long cuts all over their body. Dr. Thomas Myles, surgeon at the nearby Steevens's Hospital, was summoned -to no avail- for medical assistance to the victims.