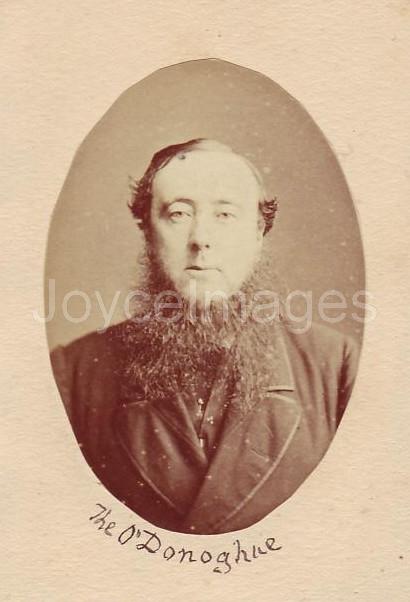 "The O'Donoghue of The Glens against The Glens of The O'Donoghue. On an eminence, the centre of the earth, rises the feldaltar of Saint Barbara. Black candles rise from its gospel and epistle horns. From the high barbacans of the tower two shafts of light fall on the smokepalled altarstone. On the altarstone Mrs Mina Purefoy, goddess of unreason, lies, naked, fettered, a chalice resting on her swollen belly."

The O'Donoghue of the Glens, also Lord of Glenflesk, is the hereditary chieftain of the cadet line of the Eoganachta dynasty of Munster. Originally styled Princes of Eoghanacht Loch Lein (Eoganacht Locha Léin), an area extending from the Roughty River at Kenmare, to Lough Lein at Killarney, the Clan divided at an early period into the distinct chiefly lines of O'Donoghue Mor (extinct since the 16c.), and O'Donoghue of the Glens. This photo is Daniel O'Donoghue (1831 - 1889), who served in the British Parliament as M.P. for Tipperary (1857 - 1865) then for Tralee (1865 - 1885).