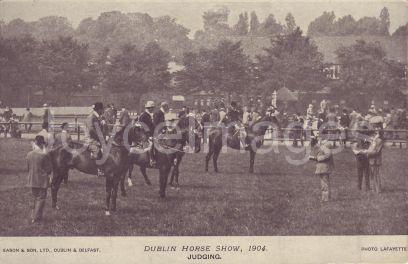 The first Dublin Horse Show was organized in 1864 by the Royal Agricultural Society of Ireland, under the auspices of the RDS; it had 366 entries with a total prize fund of £520. It was mainly a show of led-horses, with some 'leaping' demonstrations. Ass and mule classes were listed! In 1868 the RDS itself organized the show, on the Lawns of Leinster House. In 1869 'horse leaping' came to prominence. In 1870 the event was renamed 'The National Horse Show'. In 1881 the site was moved from Leinster Lawn to Ballsbridge. This PC (photo by Lafayette) shows 'Judging' at the DHS of 1904.