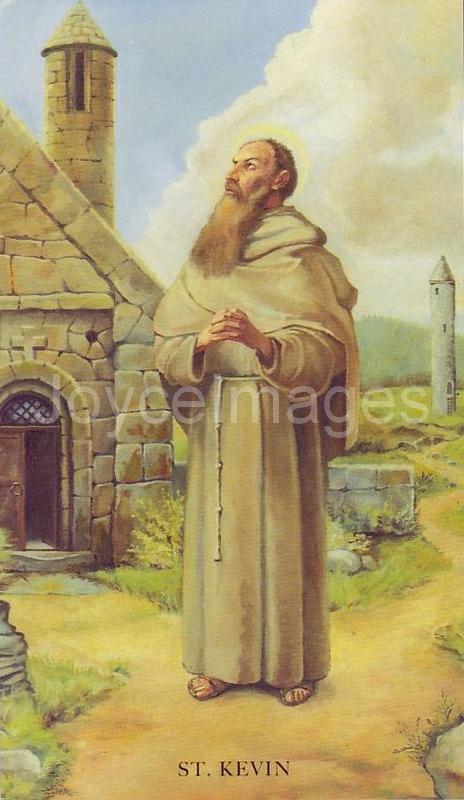 S. Kevin of Glendalough (498-618) was Irish. He was the son of Coemlog and Coemell, Leinster nobles. He was baptized by S. Cronan of Roscrea, educated by S. Petroc of Cornwall from age 7, and lived with monks from age 12. He studied for the priesthood in Cell na Manach (Killnamanagh) and was ordained by bishop Lugidus. He then went to live as a hermit for 7 years in a cave at Glendalough, a Bronze Age tomb now known as Saint Kevin's Bed. He wore skins, ate nettles and herbs, and spent his time in prayer. Word of his holiness spread, and he attracted followers. He founded the monastery at Glendalough, which included relics brought back during a pilgrimage to Rome. This house, in turn, founded several others, and around it grew a town which became a see city (later part of the archdiocese of Dublin). When the monastery was well-established, he left to live as a hermit for 4 years, then returned to Glendalough and served as abbot until his death at age 120. Represented as a monk or hermit with a blackbird sitting on his outstretched hand. Feast June 3. Notice the Irish round tower in the background of this holy card.