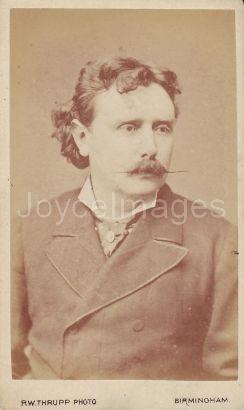 "Most beautiful tenor air ever written, Richie said: Sonnambula. He heard Joe Maas sing that one night. Ah, what M'Guckin! Yes. In his way. Choirboy style. Maas was the boy. Massboy. A lyrical tenor if you like. Never forget it. Never." (U11.610)

Joseph Maas (1847 - 1886) was an English tenor. As a boy, he was for 5 years soloist in the choir of Rochester Cathedral. He studied under J. C. Hopkins and Mme Bodda-Pyne, then in Milan in 1869. He made his first appearance in London In 1871 at one of Henry Leslie's concerts; a little later, he made his stage debut in Boucicault's 'Babil and Bijou'. In 1877 he jointed the Carl Rosa Company, and in 1878 became its principal tenor. He had a beautiful voice and finished style (that more than compensated for somewhat poor acting skills). Maas achieved highest and widest renown as an oratorio and concert singer, mostly of sacred music. I found in 'The Musical World' reviews of his singing in Haendel's Messiah, Gounod's Messe Solennelle, Mendelssohn's Hymns of Praise etc