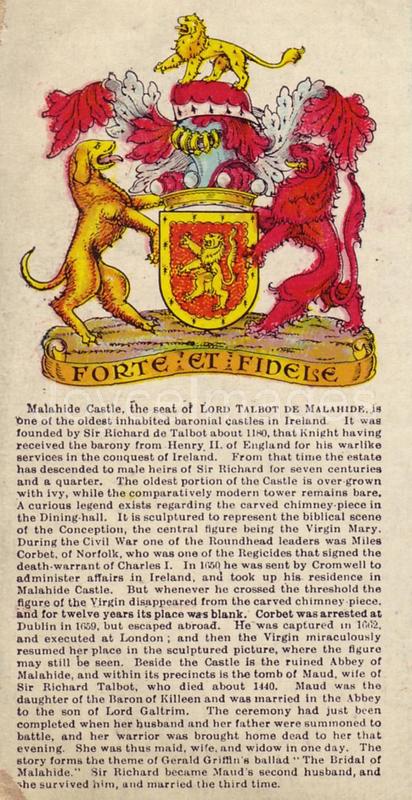 "The joybells were ringing in gay Malahide. Lord Talbot de Malahide, immediate hereditary lord admiral of Malahide and the seas adjoining. Then came the call to arms and she was maid, wife and widow in one day." (U10.156)

As the legend of the above PC explains: "Beside the Castle is the ruined Abbey of Malahide, and within its precinct is the tomb of Maud, wife of Sir Richard Talbot, who died about 1440. Maud was the daughter of the Baron of Killeen and was married in the Abbey to the son of Lord Galtrim. The ceremony had just been completed when her husband and her father were summoned to battle, and her warrior was brought home dead to her that evening. She was thus maid, wife and widow in one day. The story forms the theme of Gerald Griffin's ballad 'The Bridal of Malahide.' Sir Richard became Maud's second husband, and she survived him, and married the third time."

Gerald Griffin's ballad 'The bridal of Malahide' starts:
"The joy-bells are ringing in gay Malahide"
and includes the lines:
"She sinks on the meadow ­in one morning-tide,
A wife and a widow, a maid and a bride!"